Why Nutritional Yeast is a Vegan Superfood 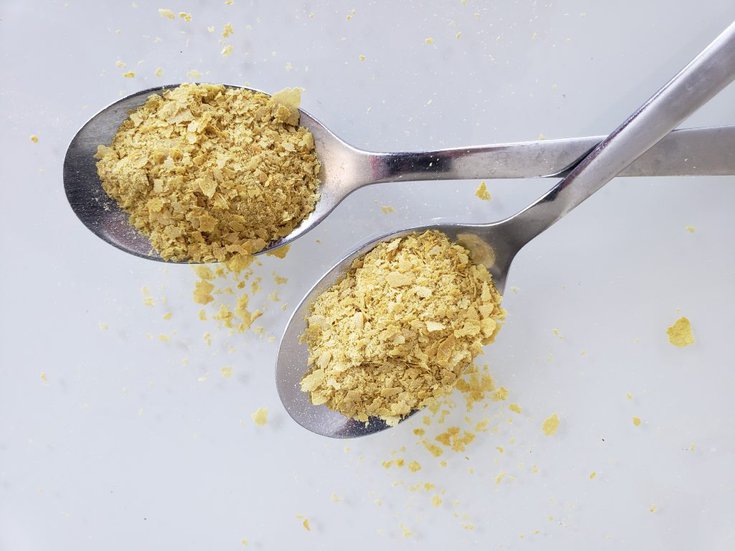 Nutritional yeast is a vegan must-have pantry staple, not only for its cheese-like flavor but also for its rich nutritional profile.

Before going vegan, I had never heard of it, but then I kept seeing it in recipes, so I decided to give it a try.

Unfortunately, I ended up buying baker’s yeast, which, spoiler alert, isn’t the same a nutritional yeast. The difference is that baker’s yeast is still active and therefore can grow inside your stomach, which can deprive you of key nutrients.

....Sooo, it was a good thing that I caught myself before dumping a ½ cup of baker's yeast into my pasta.

Now that we know what nutritional yeast isn’t, let’s find out what it is.

What Is Nutritional Yeast

Nutritional yeast is made from the organisms that grow on molasses. These organisms are then harvested and dried to deactivates the yeast, which makes it inactive- so it can't be used to raise your bread.

It comes in a yellowish-brown color, in the form of flakes, granules, or powder.

As for where to store nutritional yeast, you can leave it in your pantry or somewhere else that's cool and dark.

In short, yes. Nutritional yeast is a vegans dream! These yellowish-brown flakes are a superfood, jam-packed with B vitamins. I’m talking B1, B2, B3, B6, & B12- as I said, all of the B’s. These B vitamins help with energy production in the body.

Not to mention, this yeast is a complete protein, meaning it contains all nine essential amino acids that humans need from food. Just one serving of nutritional yeast has 2g of protein, which makes it an easy plant-based protein vegan's can add to any meal.

The Myth About B12

Nutritional yeast is a great way to get more B12 into your diet since vegans often have a B12 deficiency. Less well known, though, meat-eaters are also low in B12.

Naturally, B12 used to be consumed from eating traces of dirt on plant-based foods or from drinking water in streams or rivers. But, the bacteria that produce this vitamin are being killed through the heavy use of pesticides, antibiotics, and chlorine.

Because of this, farm animals are given a B12 supplement and are not a natural source of the vitamin.

Now, the best way for both vegans and meat-eaters to get a sufficient amount of B12 is to take a supplement.

How To Add Nutritional Yeast to Your Diet

The taste of nutritional yeast is especially useful for vegans or people avoiding dairy. Thanks to its cheesy nutty-like taste, it can be used to mirror the flavour of cheese.

Other uses for this vegan cooking necessity include:

Where You Can Buy Some

This product is starting to pop up in more and more stores, making it easier to get. Although, when in doubt, Whole Foods and other natural grocery stores usually have it.

I use the Bragg one, which comes in a little shaker. It makes it easy to both sprinkle some on various dishes or to dump a whole boatload into a dish.

This blog contains affiliate links. What's that mean? Let's Talk Vegan gets a small percentage of each sale when an item is bought through the affiliate link. These products don't, however, influence the content.